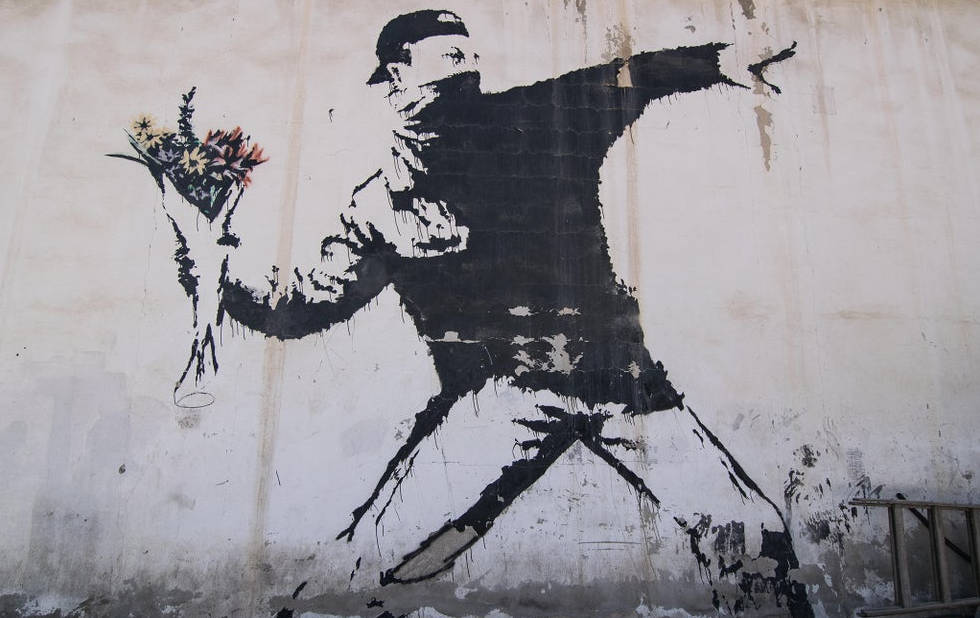 Is it possible to protect your artistic work under trademark law? Yes, if the motivation for this search for protection is that of the protection of a work used as a trademark.

Thus, when filing for a trademark, the applicant must have the intention of using the graphic filed as a trademark to identify and differentiate his products and/or services, within the framework of fair competition.

The role of trademark law is not to supplement insufficient protection in another field.

by the artist Banksy, known since 2005 as the flower thrower, is a reminder of this.

Brief overview of the facts:

On 7 February 2014, British company Pest Control Office Limited, created in order to represent the interests of the artist Banksy in the management of his intellectual property rights whilst maintaining his anonymity, filed a request for European Union trademark registration of a graphic to represent numerous products and

This registration gave Pest Control Office Limited exclusive rights to the exploitation of this graphic as a trademark, enforceable against third party use.

In 2019, British company Full Colour Black Limited, specialising in the production of postcards, and wishing to reproduce this work within the framework of its activity, brought an invalidity action against the European Union trademark

on the grounds that it was applied for in bad faith as the owner had no real intention of exploiting it as a trademark for business purposes (1).

In support of its action, Full Colour Black Limited cited the official and constant position of Banksy, the author of the work for which the trademark application had been made, namely his incitation to disrespect copyright and trademark laws. In further support of its action, Full Colour Black Limited also referred to the fact that Banksy allowed and invited any third party who so wished to reproduce his works on a non-commercial basis, going so far as to personally provide the means of reproducing his works.

Banksy cannot, without disclosing his identity, act on the infringement of copyright by third parties exploiting his works for commercial purposes.

According to Full Colour Black Limited, it is within this framework and in order to circumvent the obstacle to such an action, that Banksy entrusted the company Pest Control Office Limited with the registration of his work as a trademark:

that the trademark was filed as a substitute for the protection of the work by copyright and not as an indicator of origin, and was therefore filed in bad faith in order to provide protection from an issue arising from another legal regime.

There is no legal definition of a filing for trademark carried out in “bad faith”.

However, case law provides and clarifies the elements for the understanding of this notion (2): bad faith can be established when there are relevant and consistent indications that the owner of a European Union trademark has filed his registration request without any intention of exploiting the trademark in question or with the intention of obtaining exclusive rights for purposes other than those falling within the functions of a trademark of which the main purpose is that of indicating the origin of the products and services it identifies.

In its decision of 14 September 2020 (3), the EUIPO deliberated that the graphic trademark representing the work by Banksy had been filed in bad faith. It therefore pronounced its cancellation.

In particular, it based its conclusion on the absence of commercial exploitation of the trademark since its filing.

With this decision, the Office condemns the manipulation of trademark laws by Banksy and the Company to which he entrusted the management of his rights.

Effectively, the Office considers that Banksy’s anonymity represents an obstacle to the exercise of his prerogatives under copyright. By filing this trademark, Banksy apparently wished to take advantage of strong industrial property rights allowing his work to be protected as a trademark in addition to the protection offered by copyright.

This decision could have far-reaching consequences for Banksy. Effectively, Full Colour Black Limited filed European Union trademark applications for several works by the artist. Yet, pursuant to this decision, henceforth, all of these trademarks may be subject to the same fate, unless Banksy decides to make genuine and substantial use of them.

In any case, it recalls an essential principle of trademark rights: any filing must be motivated by the intention to exploit the graphic as a trademark.